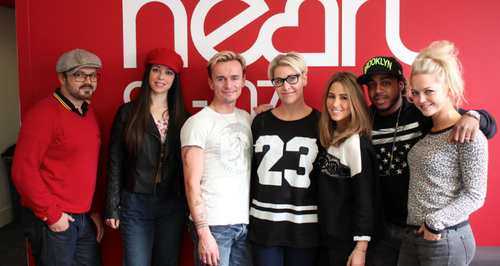 S Club were interviewed by Heart the other day, check the outcome below:

The famed noughties band insist they’ve had no trouble remembering the lyrics and polishing off their old dance routines in the lead up to their big comeback tour, which they exclusively revealed to Heart has “been on the cards for two years”.

It may have been over a decade since the ‘Reach For The Stars’ hit makers dominated the charts but they’re proving just as popular as ever after announcing they would be adding an extra date to the London leg of their nationwide comeback tour.

All original members Tina Barret, Paul Cattermole, Jon Lee, Bradley McIntosh, Jo O’Meara, Hannah Spearritt and Rachel Stevens will be reuniting on stage to perform their biggest hits for fans and they are “super excited” about it.

“I think we’re just more excited than nervous,” lead singer Jo’Meara told Heart showbiz reporter Kevin Hughes. “Because touring is what we all love to do so it’s going to be absolutely unbelievable.”

The mounting pressure of a comeback tour hasn’t phased the group as Bradley claims they are more concerned with putting on a great show and “making the fans proud.”

Listen to the full interview!

Surprise! Hannah and Adam have a new addition to t

What a cutie baby Taya is! Some new pictures from

Who's the cutest? Baby Taya! Some new pictures fro