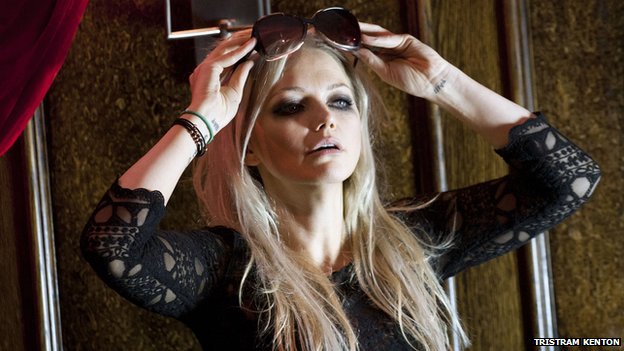 Hannah chatted to BBC about The Armour and S Club 7. She also says that we won’t hear any new songs during the tour, it will be all about nostalgia.

In a case of art imitating life, Hannah Spearritt is playing a pop star making a comeback in a new play – as she prepares for S Club 7’s reunion tour.

“It played a big part in taking the role,” she says after a performance of The Armour at the Langham Hotel in the West End of London.

In Ben Ellis’s play, Spearritt plays a global pop star with “more Twitter followers than the population of Venezuela” on a comeback tour after a period of self-destruction.

Relaxing in one of the hotel bars after a performance, Spearritt is keen to point out that there is not too much of a similarity between her and stroppy pop diva Poppy.

“I thought it would be great fun to play someone so edgy and off the wall. I could relate in some ways with my background and my history.”

Spearritt, now 33, made her name as a teenager in S Club 7 who enjoyed 11 UK top 10 hits, including three number ones.

The group formed in 1998 and rose to fame in their own children’s TV series, Miami 7, on BBC One. After the departure of member Paul Cattermole in 2002 the remaining six members continued as S Club, but they split in 2003.

Last November, S Club 7 reunited for the first time in 12 years for BBC Children in Need. They performed a medley of hits – including Reach, Don’t Stop Movin’ and Bring It All Back – and caused a frenzy of social media nostalgia.

“I was completely overwhelmed,” says Spearritt. “It was really positive. There was a surge of love coming from Twitter.”

Days later, S Club 7 announced they were embarking on a reunion UK arena tour. Rehearsals start soon, while Spearritt is still appearing in The Armour.

She admits she is keen to “go down memory lane” after so many years away from music touring.

“We’ll bring out some old tunes, the Zimmer frames and the WD-40,” she jokes.

“What we have learnt from Children in Need is that it’s important to keep the majority of the dance moves because we’re doing it for the fans who were fans when we were in our prime.”

There will not be any new songs, she confirms. It is all about nostalgia.

“S Club was a massive part of my life for five or six years. I’m really proud of that and never want to forget it. I feel lucky to be able to celebrate it again and do it for a little period of time.

“Now we have Twitter, people are so vocal about what they do want to see. So it seems like the right thing to do, not take it too seriously and celebrate it.”

She is not sure what the future holds for S Club 7 after the tour in May.

“We know when the end is, whereas before it was consuming our lives. I think it will be a lot more fun, not that it wasn’t fun.

“I felt like a baby back then. When I started, that was half of my life ago. It’s kind of crazy to come back to do something that’s such a young thing. Hopefully we don’t look too old.

“All the kids that were fans are in their twenties now – so hopefully they’ll get the chance to relive their youth.”

Surprise! Hannah and Adam have a new addition to t

What a cutie baby Taya is! Some new pictures from

Who's the cutest? Baby Taya! Some new pictures fro